What is Omega 3 Fatty Acids? 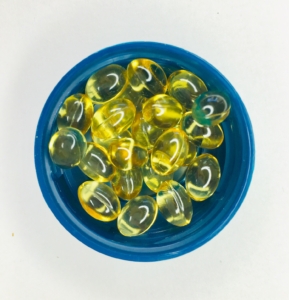 Maybe you’ve had some skin issues which include dry skin or itchy skin and someone recommended Omega-3 Fatty Acids.  If you take a look at my Vitamin and Supplement Favorites list, you’ll notice that Omega-3’s are right on the list. But what exactly are they.

They’re necessary for the human body to survive but we have to get through them foods. They can be found in fish, such as salmon, tuna, and halibut, other seafood including algae and krill, some plants, and nut oils.

Omega 3 Fatty Acids foods are also referred to a polyunsaturated fatty acids and they’re know to be extremely helpful in brain function in addition to normal the human body normal growth and development.

Recently, the American Heart Association recommends them because they help prevent the risk of heart disease. The recommended dosage is at least twice per week.

So, do you eat fish?

What is fish oil good for?

Do you know which fish are recommended by the American Heart Association?

The other sources of omega 3  that the AHA recommends fatty fish such as mackerel, lake trout, herring, sardines, albacore tuna, and salmon.

But what additional benefits does Omega 3 Fatty Acids provide us! They not only help with heart

Most importantly as we age, Omega 3 fatty acids have been determined to be beneficial in cognitive (brain memory and performance) and behavioral processes.

What problems can be associated with a lack of Omega 3 Fatty Acids? Infants have been determined to be prone to vision and nerve problems. Other omega 3 fatty acid deficiency problems include fatigue, poor memory, dry skin, heart problems, mood swings or depression, and poor circulation.

Blood fat [triglycerides]. According to a number of studies, fish oil supplements can also cut elevated triglyceride levels. Having high levels of this blood fat is a risk factor for heart disease. DHA alone has also been shown to lower triglycerides.

Cardiovascular health. Omega 3 fatty acids appear to lower the overall risk of death from heart disease. Fish oil may reduce arrhythmias, and people who take fish oil supplements after a heart attack cut their risk of having another heart attack. Eating fish once or twice a week seems to significantly lower the risk of stroke.

Depression. Researchers have found that cultures that eat foods with high levels of omega-3s have lower levels of depression. Fish oil also seems to boost the effects of antidepressants. Fish oil may help reduce the depressive symptoms of bipolar disorder.

Prenatal health. Studies show that EPA and DHA supplementation during pregnancy boost the health of pregnant women and the development of their children. DHA appears to be important for visual and neurological development in infants.

Asthma. Evidence suggests that a diet high in omega 3s reduces inflammation, a key component in asthma. However, more studies are needed to show if fish oil supplements improve lung function or reduce the amount of medication a person needs to control their disease.

ADHD. Some studies show that fish oil can reduce the symptoms of ADHD in some children and improve their cognitive function. However, more research is needed in this area, and omega-3 supplements as a primary treatment for this disorder are not supported by research.

Alzheimer’s disease and dementia. The evidence is preliminary, but some research suggests that omega 3s may help protect against Alzheimer’s disease and dementia. Recent studies have also evaluated whether the omega-3 supplement DHA can slow the decline seen in those with Alzheimer’s dementia or in age-associated memory impairment. One recent study showed that DHA can be a beneficial supplement and may have a positive effect on gradual memory loss associated with aging. However, more research needs to be done.

Here are some other articles about vitamins and minerals you may enjoy reading:
[pagelist child_of=”2375″][pagelist include=”2375″]

What is exfoliation? 9 Fruits for Healthy Skin Care You Can’t Go Wrong With
Scroll to top